Following new NICE draft guidance on bariatric surgery in diabetic patients and its recommendations that diabetics with a BMI over 30 be eligible for receiving the operation on the NHS, a number of different organisations such as Diabetes UK have responded by specifying that the operation should only be considered as a ‘last resort’ due to the risks it carries. Because previous NICE guidance made the operation an option for almost morbidly obese patients with either a BMI over 40 or 35 if they were suffering from another condition (such as type 2 diabetes), new guidelines have the potential to extend eligibility to around 850,000 patients according to Diabetes UK. As a result of the publication of these numbers, experts in the area are wondering whether the NHS will be able to financially cope with the rising demand, as the surgery is an expensive option, costing up to £15,000 per intervention according to NHS Choices.

While different views on the matter have been expressed through the media, ranging from the NHS facing financial difficulties to the inefficacy of short-term diets, we looked into what UK-based healthcare professionals had to say on the topic by studying what they say in social media.

The majority of tweets coming from digitally active UK healthcare professionals today disagreed with the premise of weight loss surgery as a viable means of lessening the NHS’ diabetes burden, with some HCPs worried about the affordability of the treatment, whilst others do not see it as an adequate solution to be considered over more structural ways of addressing the problem (prevention, lifestyle education, and so on).

While tracking the bariatric surgery related tweets coming from UK HCPs so far today, we calculated that:

The main reasons why UK doctors consider the recently issued NICE guidelines unsuitable for the current UK diabetes landscape include:

UK-based psychologist Trace Senior (a diabetes sufferer himself) responds to BBC Radio 4 Today’s tweet on the topic, suggesting that the new guidance might mean that patients are not receiving adequate education around the issue. 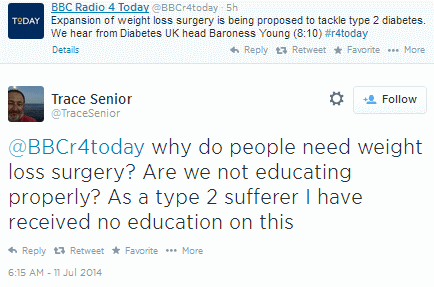 Voicing another concern responding to the draft guidance, Bury St Edmunds based surgeon Dermot O’Riordan comments on the news, stating that the current number of bariatric centres in which patients could receive the procedures is already below sufficient. 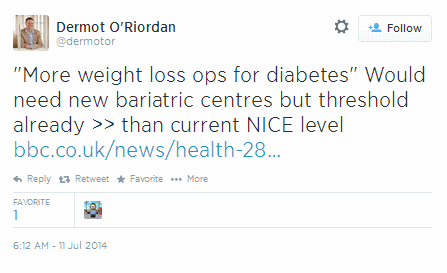 Lifecoach and media psychotherapist couple Nik and Eva Speakman also tweeted about the issue, and while they considered surgery to be an expensive solution to a simple question, this tweet was met with some backlash from user Nick Hawkes, who has asked them to delete their tweet, deeming it ‘cruel and unfair’ and suggesting to the couple that they may be perpetuating stigma around the surgery. 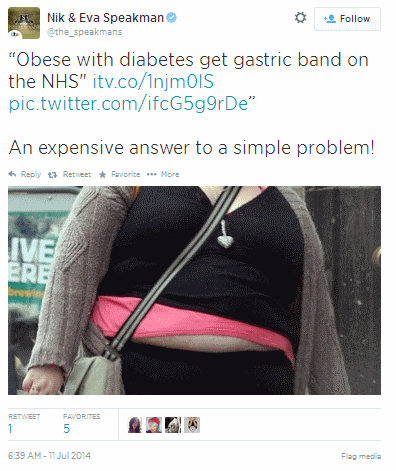 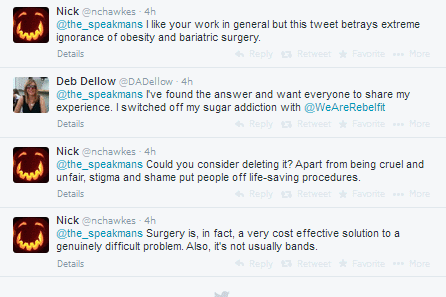 Offering a differing perspective was Southampton-based upper GI surgeon and scientist Tim Underwood comments on the topic, highlighting the surgery’s beneficial effects as a solution to the current financial burden being placed on the NHS to treat diabetic patients in the United Kingdom. His tweet comes in response to Bridgend-based GP Justine Hawkins’ tweet saying ‘NICE have got it wrong’. The HCP conversation generated by this response focuses on the long term financial and health outcomes of the draft guidance, with the conclusion that weight loss surgery is not a solution to the problem, nor is it a replacement for a healthy lifestyle, but rather a means of reducing some of the pressure placed on cash-strapped NHS trusts to deal with the diabetes epidemic. 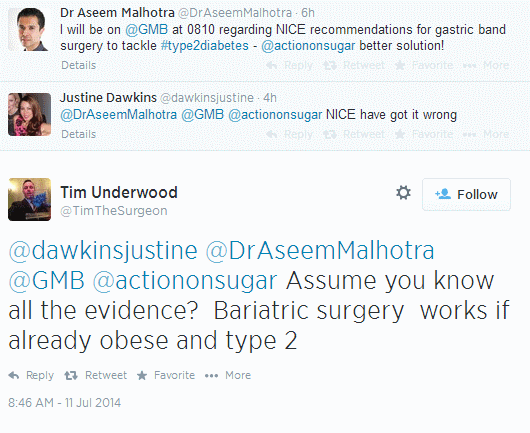 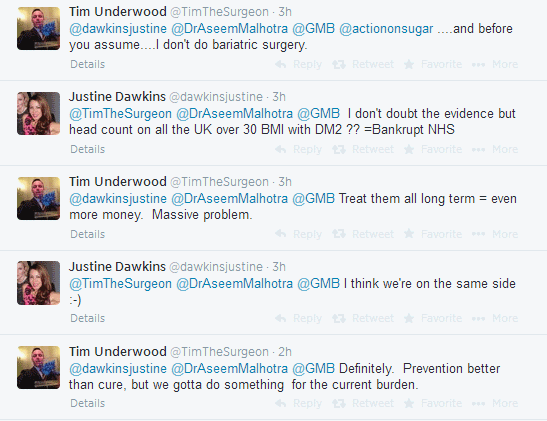 I expect we will be hearing more on this topic from HCPs in the coming days, so we will watch how the story develops and provide an HCP views update next week.