World Immunisation Week in 5 Graphs: See What Doctors Have Been Saying

This week, we looked back at World Immunisation Week related tweets to see what healthcare professionals around the world were saying about the topic of vaccines and immunisations. World Immunisation Week is one of the World Healthcare Organization’s many awareness campaigns, and aims to promote vaccines as a routine means of preventing diseases such as hepatitis and influenza. The theme this year was ‘Are you up-to-date?’, a question aimed at reminding patients, consumers, carers and healthcare professionals around the world to check their vaccination status and make sure they have had all the necessary vaccinations that are available to them.

We collected almost 3000 tweets in 13 languages from healthcare professionals on Twitter around the world, and took them apart to find out what doctors care about in terms of immunisation topics this year.

1.Which countries were most active during the campaign?

Unsurprisingly, US-based HCPs accounted for a little more than half of all the mentions, being present in 52% of the conversations. The United States is the country with the most digitally active HCPs and this really shows in our study: American HCPs tweeted news and statistics about developments in vaccination and were generally encouraging of immunisation as a means of preventing chronic diseases.

Guy Chapman, US-based HCP, below, links to a National Geographic article about the link between the MMR Vaccine and autism: 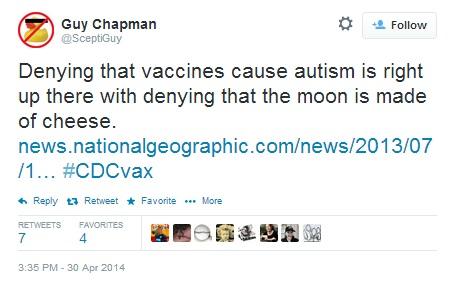 The list of the top 10 most active countries during the study period can be seen in the following table: 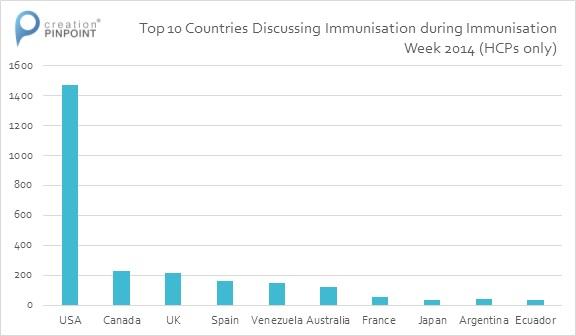 2. What are the topics most discussed by HCPs globally?

Creation Pinpoint data indicates that the most talked about topic this year was children’s immunisation and topics related by childhood vaccinations. UNICEF was a big voice digitally, their tweets being re-tweeted by HCPs around the world. 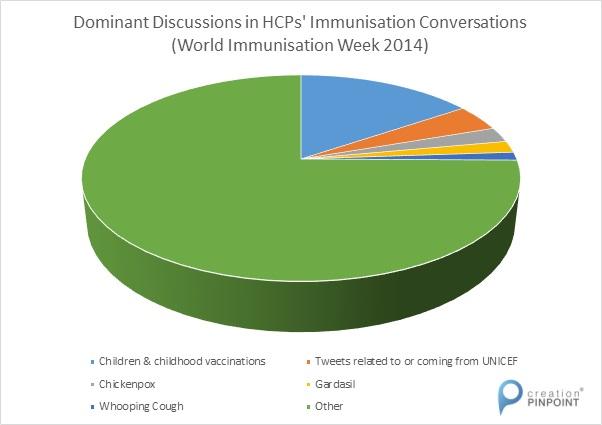 Below are some examples of HCPs tweeting about vaccine-related topics: 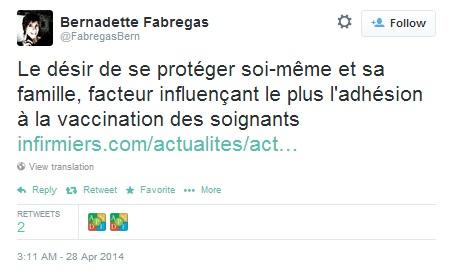 France-based HCP tweets about vaccination amongst caregivers in France
https://twitter.com/FabregasBern/statuses/460722919602413569

3. What are the top 5 vaccines HCPs are talking about?

The most talked about vaccine was influenza, followed by chickenpox. See table of most discussed types of vaccines with examples below: 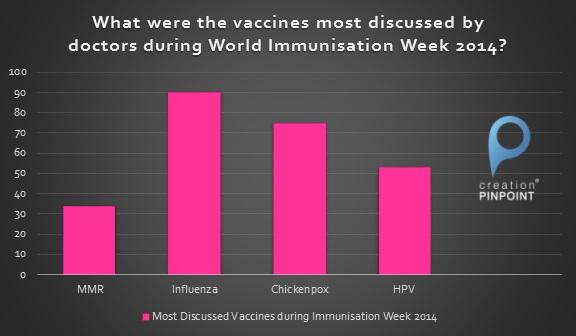 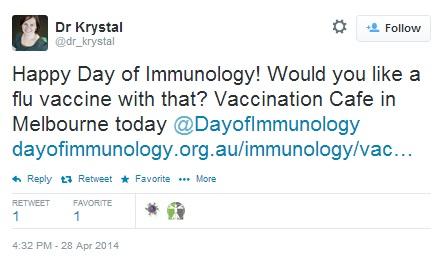 4. What were the day-to-day topics of interest and how did conversations fluctuate?

The conversation reached its peak volume on the 25th of April, when doctors were particularly active in sharing vaccine-related statistics from the Center for Disease Control and Prevention, as seen below: 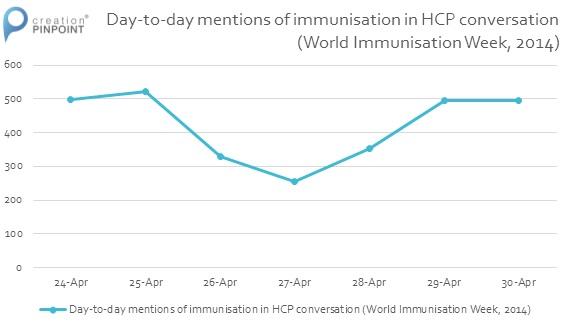 When looking closely at the other peak in conversation, happening on the 29th of April, we noticed that a lot of mentions on this day (a bit over 10% of them) are RT’s of American TV show presenter Stephen Colbert, who tweeted the following ironic tweet:

“Who needs vaccines? Many American heroes were never vaccinated. Off the top of my head: FDR. Wait… bad example.”

This was then retweeted by doctors, presumably as a sign of agreement with Stephen Colbert, and to show their support for vaccine by ironically adopting the stance of a vaccine sceptic.

The great majority of doctors globally are supportive of promoting vaccines as a preventative measure. The peak in conversation described above shows the variety in doctors’ tweets, demonstrating how they will often use their account to tweet both about medical/clinical matters as well as personal matters. The above is an example of doctors using a well-known satirical figure’s opinion (which they happen to agree with) to perhaps raise more awareness amongst their followers in an amusing way.

5. Who is behind the top 3 most active Twitter accounts talking about vaccination & immunisation?

The most active tweeter on the topic of immunisation is Canada-based Shelagh Machin, who is also Immunization Program Coordinator at Vancouver Island Health Authority. Shelagh made around 40 mentions of vaccination related topics during the study period. 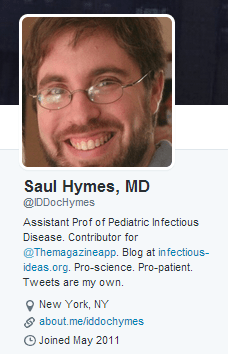 The third most active account was that of a Caracas-based HCP called Rigoberto Marcano. Rigoberto is a specialist in Internal Medicine in Venezuela and quite digitally active. He also runs his own blog, ‘Medicina Preventiva’.