There are several drugs on the market for the treatment of melanoma, but few exist for basal cell carcinoma, which accounts for almost 80% of non-melanoma skin cancer. Recently, Novartis has released news that sonidegib, their advanced basal cell carcinoma drug (BCC), has met a primary endpoint in a Phase II study (BOLT). While this data is to be presented at a scientific meeting later in the year, we can nonetheless explore discussion around this news over the past year, as well as studying the therapy area generally.

Looking backwards to January 2013, we can see a number sites (where HCPs contribute content) that mention BCC and related topics. There are several types of site present, including what could be blogs on a doctor’s practice site, academic sites for journal articles, and Twitter, which contains a large portion of discussions around BCC. 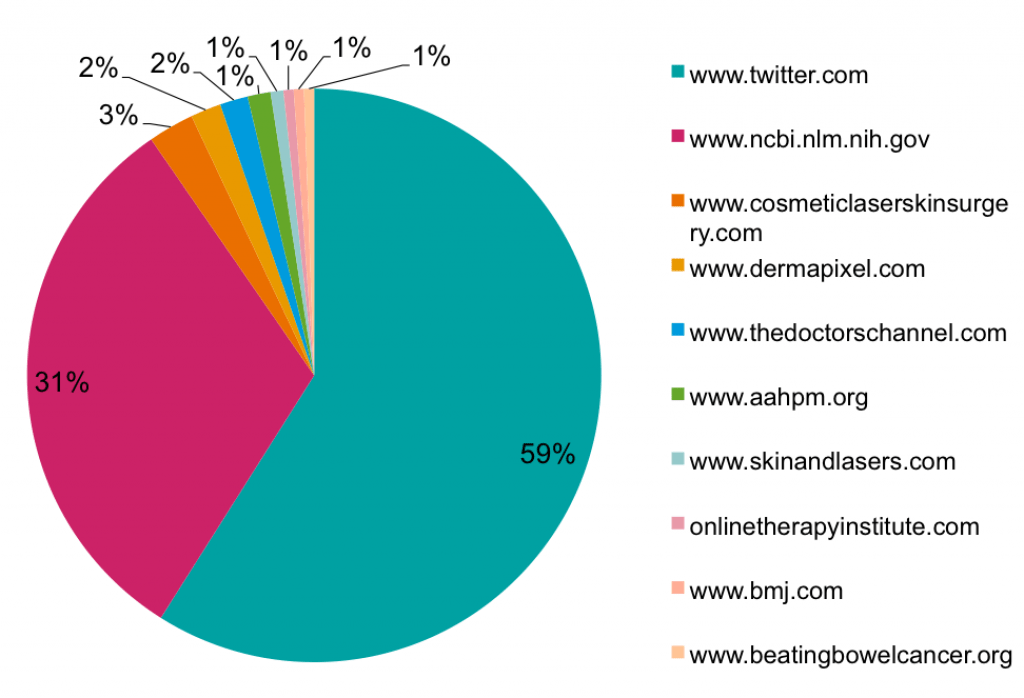 We can take all tweets from HCP users and map them in a day-by-day timeline that spans the previous year in order to see how the conversation evolved. The peaks may correspond to news, a conference, or a conversation involving several HCPS around a hot topic in the disease area. For example, of high interest was Hugh Jackman’s reveal that he had BCC in November, which several HCPs shared and discussed. There are also conversations happening about several treatments for BCC, including Erivedge (vismodegib), a drug from Roche that targets the same pathway as sonidegib.

Figure 2. Timeline of Twitter mentions of basal cell carcinoma and related topics from January 2013 to February 2014.

Further breaking down the overall BCC timeline to separate treatment discussions can yield interesting event-based statistics. For example, the imiquimod/surgery HCP discussions in July centred around their comparison in the SINS study, while vismodegib was often talked about due to its conditional approval in Europe.

Looking at the volume for each treatment shows that Erivedge has a significant share of voice. With sonidegib data looking promising, the conversations have only just begun, and it will be interesting to observe how this develops in the coming years.