Fifteen uses for Botox you never knew doctors talked about 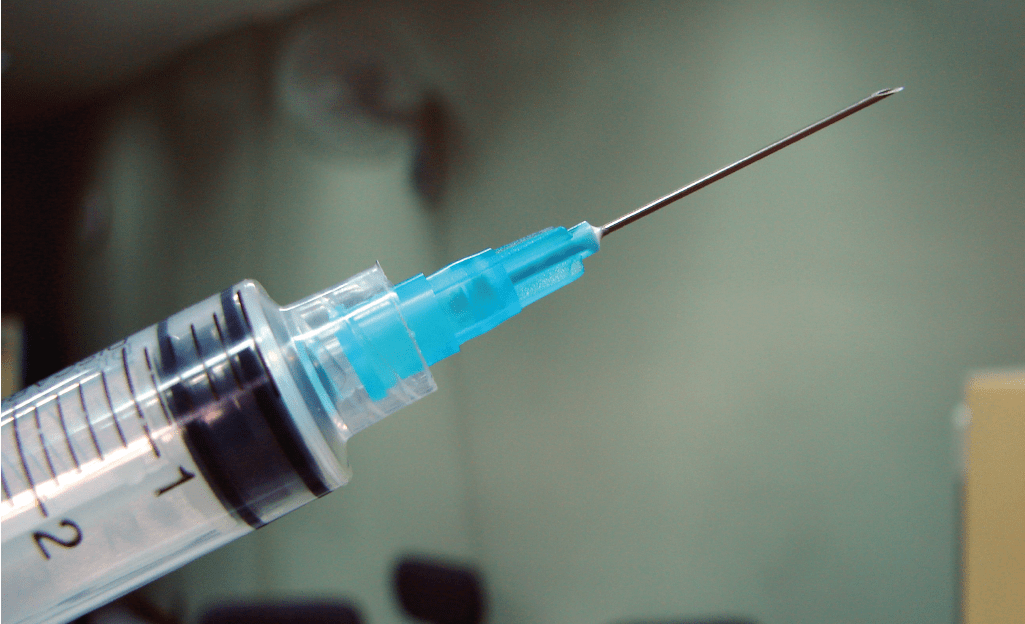 Listening to healthcare professionals (HCPs) talking about medicines can provide a glimpse into their experiences with products, as well as their hopes or concerns about what they hear from each other. On social media, it is common to find physicians, pharmacists and other professionals discussing how they do or may treat patients; indeed, some specialists have said interacting with peers on social media has helped them to learn new approaches to treatment.

Is it possible that the experiences of doctors, shared openly on public social media, could lead to clinical research and, eventually, the approval of new uses for products?

One well-known product, which has seen numerous new usage approvals over recent years, is Botox (onabotulinumtoxinA), which first became known widely for its use in reducing facial wrinkles. Now, as Time magazine recently put it, it is ‘the drug that’s treating everything’.

A study1 of 60,000 mentions of Botox online among HCPs worldwide, undertaken between January 2010 and January 2017, shows some significant trends over the past six years. While discussion about the treatment of wrinkles and other facial or rejuvenation treatments has been common throughout the study period, recent years have seen an increasingly diverse range of treatment uses associated with the product in these conversations.

Filtering out the conversation directly related to treating wrinkles (which accounts for more than one third of HCPs’ online mentions of Botox) reveals numerous other treatments associated with the product. Among these are overactive bladder, excessive sweating and cancer. 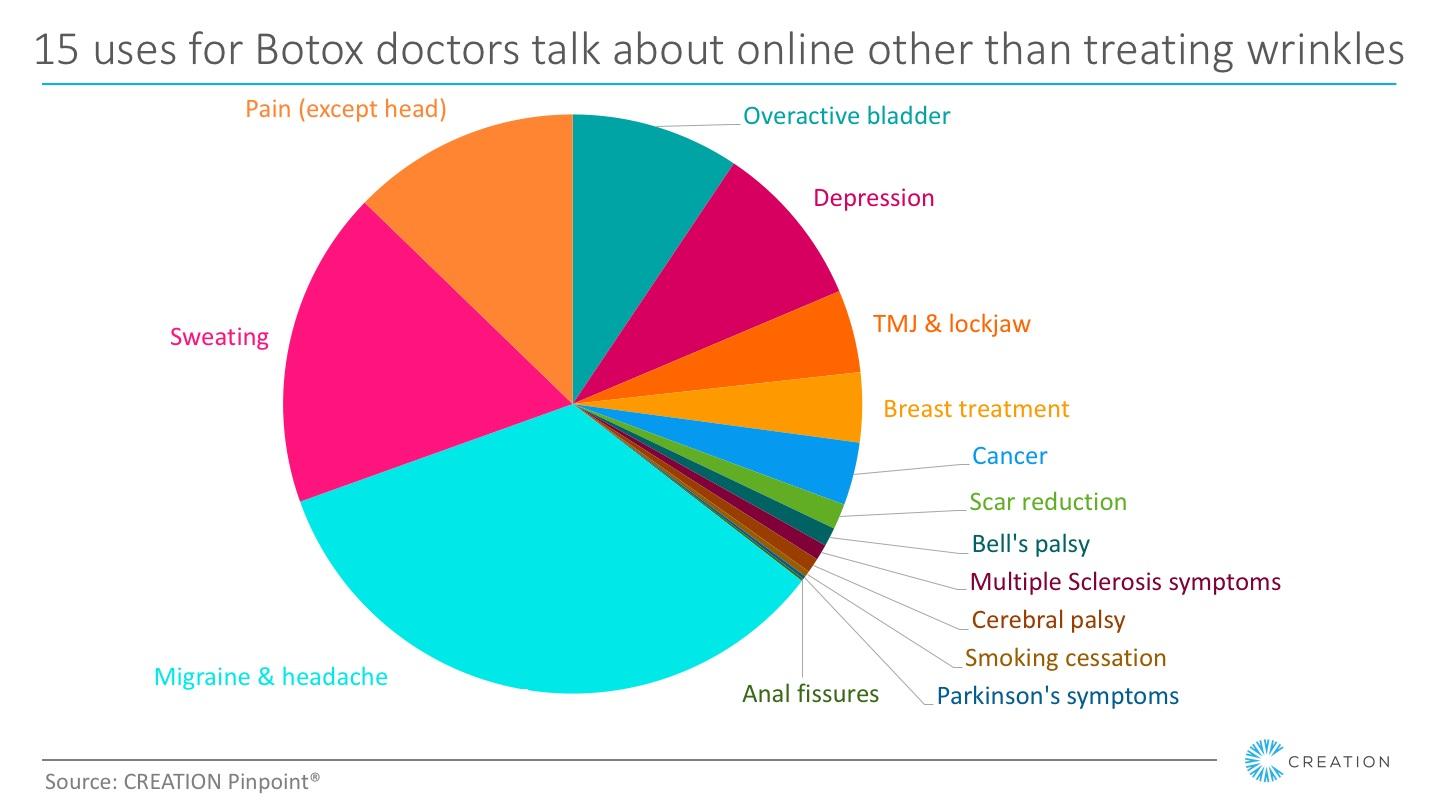 It is interesting to note that, while Botox is indicated for the treatment of migraine, it is also discussed in a wider context for headaches and, increasingly, for many other forms of pain. 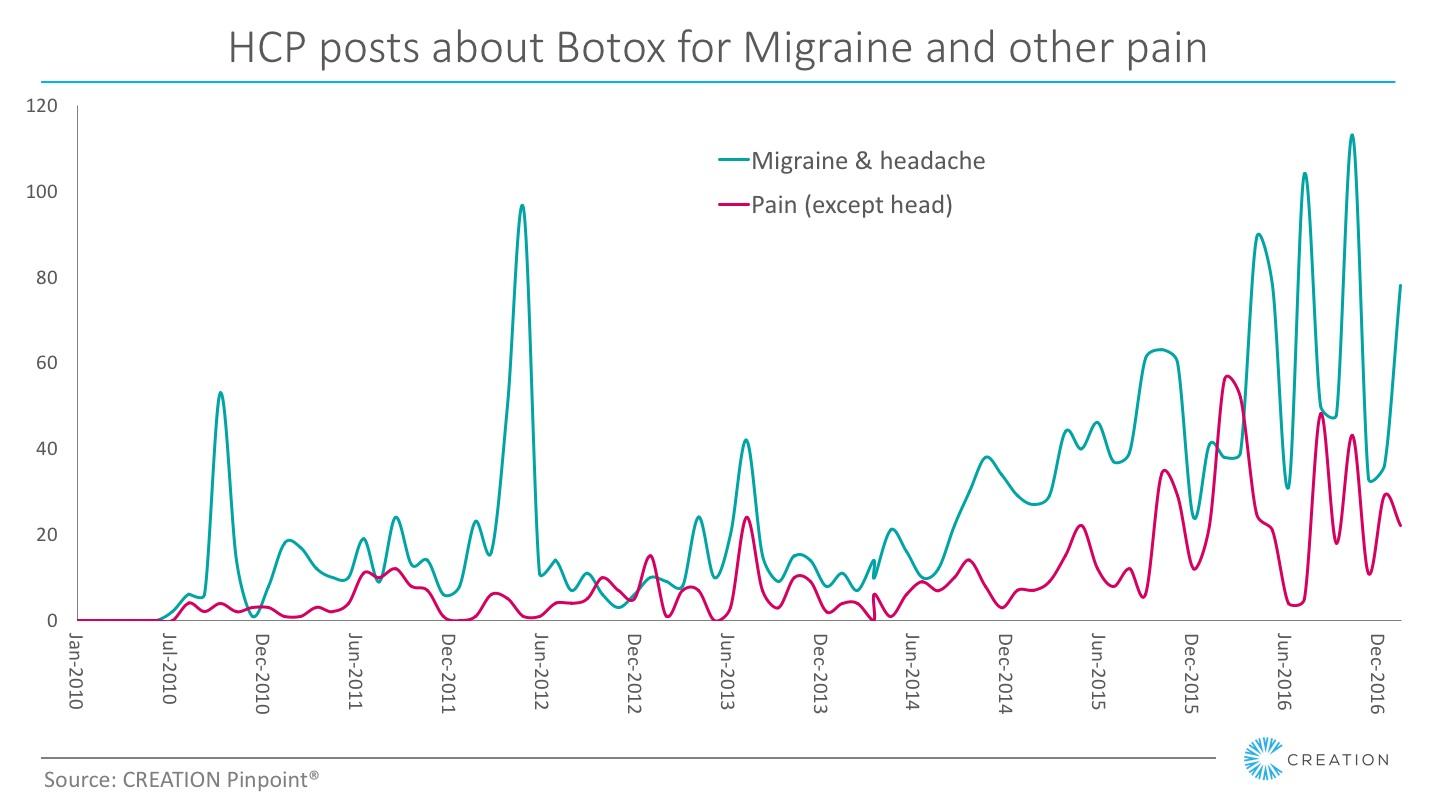 The data shows a significant spike in volume of HCPs’ conversations about Botox for migraine when the FDA approved its use in the US in 2010, and an even greater spike when NICE recommended it for use in the UK in 2012. In subsequent years, HCPs’ overall conversation relating to Botox and migraine has grown steadily. Not all of it supports the product’s use, but there is certainly steady and growing interest among the professional community.

Other conversations about Botox for pain included jaw pain, foot pain, knee pain, among many others. Interest in Botox for foot pain spiked in July 2013 after Dr Andrew Schneider blogged about the topic.

More recently, doctors talked about Botox in neuropathic pain after a study showed positive results. Neurosurgeon, Alireza Faridmoayer, was one of the HCPs who tweeted coverage of the study.

An interview with Dr Allen Gabriel, who led a study on use of Botox to reduce pain after mastectomy, was shared actively when it was first posted in Nov 2015, and then spiked again in October 2016, indicating ongoing interest, although the article points out that the use is not approved by the FDA and therefore currently ‘off label’.

The idea of using Botox to treat depression goes back more than a decade, and there has been growing interest among HCPs in this. In 2011, they discussed the topic online, sharing stories quoting a 2006 study by Dr Eric Finzi in which he studied the association between muscles of the face and emotions felt in the brain.

Later the same year HCPs shared a link to an interview with psychiatrist Dr Michelle Magid, who had led a further clinical study on the use of Botox in depression. In the interview, Dr Magid referenced the 2006 trial, but said that it was her husband’s work as a dermatologist that inspired her to launch the first double-blind placebo controlled study.

HCPs reacted again in March 2012 when Medscape reported a study on Botox in depression in Europe by Tillmann Kruger, MD, Associate Professor in the Department of Psychiatry at Hannover Medical School in Germany.

In 2014, Dr Finzi was back, conducting a randomised, double-blind, placebo-controlled trial in partnership with psychiatrist Norman Rosenthal, MD, who blogged about the study prior to it being published in the Journal of Psychiatric Research. Rosenthal, who is actively engaged on social media, created a new peak in interest among other peers online with his post. Since then, many doctors have been actively promoting the use of Botox in depression, citing the 2012 and 2014 studies.

Meanwhile, several other clinical studies have trialled Botox for treating depression, including Allergan’s own study, OnabotulinumtoxinA as Treatment for Major Depressive Disorder in Adult Females, which is ongoing.

What else could we learn?

If physicians’ ideas about drug use and their early trials on patients may have inspired Allergan’s own clinical trials, eventually leading to approved uses, what else could we learn from their experiences? Listening for ‘off-label’ uses of a drug is a controversial idea among many in the heavily-regulated pharmaceutical industry, where encouraging off-label use is illegal.

The Botox story shows that there is opportunity for drug makers to learn from HCPs’ experiences. The unprompted online conversations taking place among physicians as they share their ideas might just provide a compliant opportunity to accelerate innovation, for those who listen.

1 Data discussed in this article is from a study of HCPs’ posts about Botox on public social media channels between January 2010 and January 2017, researched using CREATION Pinpoint. Note that where Botox has been discussed in connection with a particular use, this does not necessarily indicate a recommendation of the product in this context or any personal experience of its use by the HCP.

This post was originally commissioned for PharmaPhorum in February 2017

The header image was sourced from Flickr user ‘ZaldyImg‘, under creative commons licence.