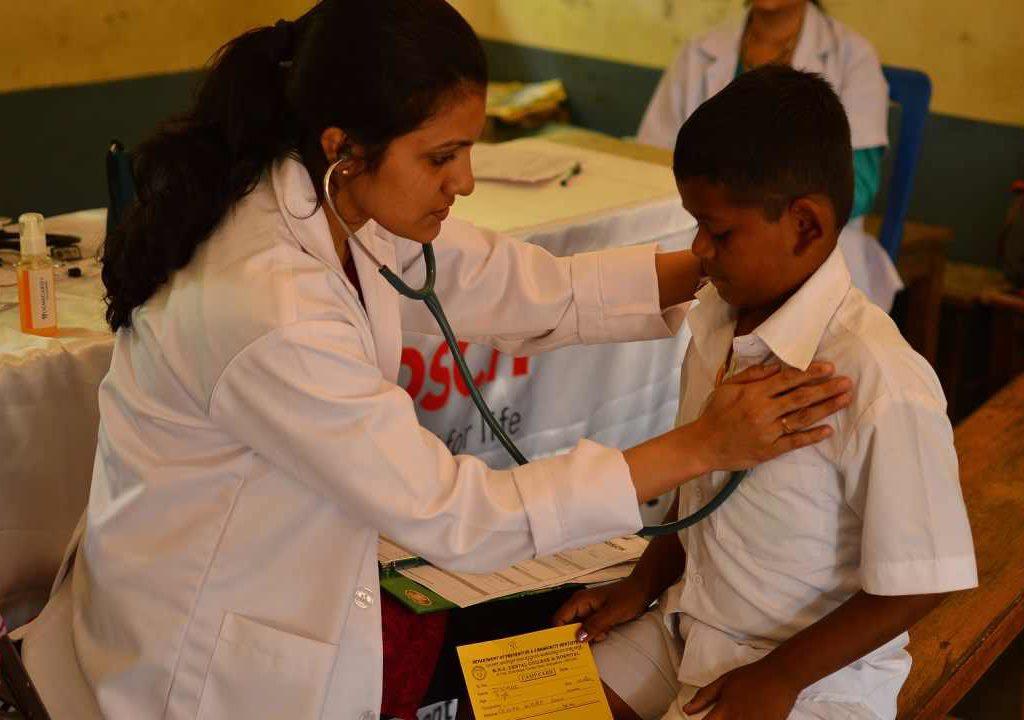 India’s Social Media Market
According to recent data, India’s active social media users constitute 9% of the total population, and the number of social media users is increasing at a rapid rate every year thanks to a growing internet penetration and a large youth population. As per a recent report by We Are Social, Facebook and WhatsApp still dominate social media platforms in India closely followed by Google Plus and Twitter. 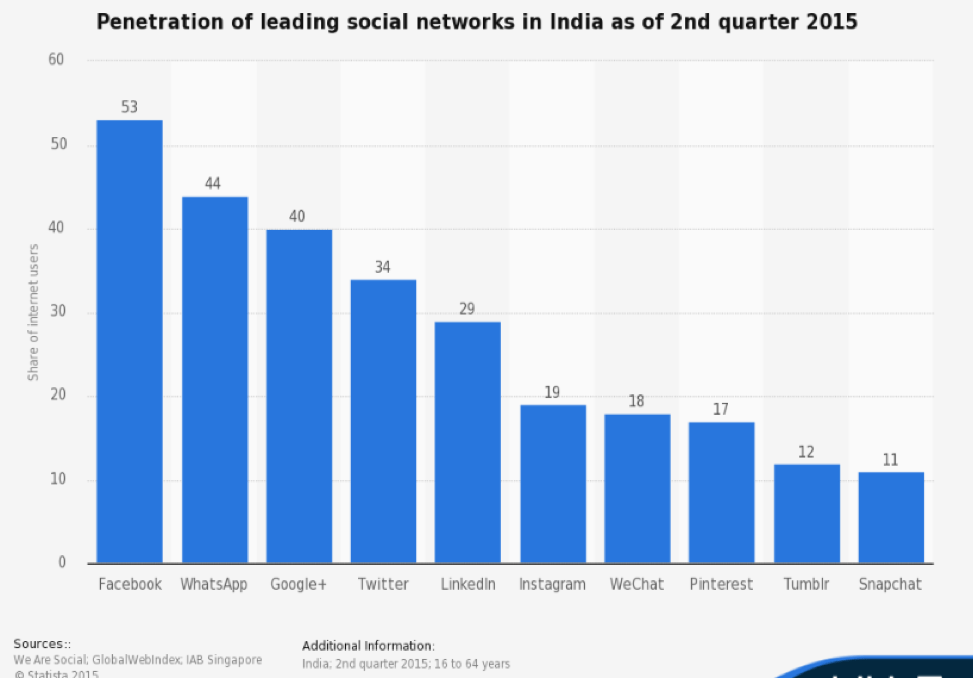 Twitter in India accounts for 17% of all social media usage. Top Twitter influencers of India in terms of industry are dominated unsurprisingly by Bollywood, Media, Business, Cricket and Politics!

Influencers from the Healthcare industry have been slow to use social media as a mode of sharing health-related information. A possible reason for this slow uptake could be the busy schedules led by healthcare professionals, leading to unfamiliarity in using these platforms. However, the recent outbreak of Swine-Flu and Dengue has seen more HCPs using social media to build awareness about these illnesses.

Twitter among Indian HCPs
Our study using Creation Pinpoint has revealed that India now has a substantial number of HCPs using social media, especially Twitter. Most of these users are from the urban cities like Mumbai, New Delhi and Bangalore. However, an analysis of their behaviour shows that only a few use it exclusively for healthcare-related matters. Some interesting demographic statistics that were revealed during our study include:

(1) More than 70% of the HCPs who Tweet are male – this could be on account of two primary reasons:
(a) The re-emphasis of the fact that India has more male internet users than female.
(b) Nearly two-thirds of India’s Healthcare workforce constitutes of men.

(2) Topics discussed on social media vary from Beauty/Health & Fitness to Books to Science:
A thorough study of HCP Tweets reveals that only a few use it to raise awareness about healthcare issues specifically related to their field of practice. Most  HCPs re-Tweet general information on healthcare rather than providing first-hand information.

However, an exception to the above case was in October this year when India faced one of its worst outbreaks of dengue fever. This period witnessed a sharp rise in the number of dengue-related Tweets among Indian HCPs. This also shows how India is concerned more about curative care than general preventive care and awareness.

(3) Top HCP Tweeters in India:
The top HCP Tweeters in terms of the largest number of followers are also the ones involved in politics actively. Politicians in India have preferred to use Twitter as a strong PR tool. Even though these top Tweeters occasionally mention health related matters, their objective is far from causing awareness and knowledge about healthcare. This once again proves how Healthcare takes a back-stage to other more preferred topics like Politics, Bollywood etc.

Dr. Ajmersingh Mann, a homeopathic doctor who is a contributor at ExpertColumn.com where he writes about Psychology and Neurology. He further Tweets these articles in his Twitter profile and has more than 2,700 followers.
Pooja Makhija is a renowned Dietitian and Nutritionist in India whose clients include some of the actors from Bollywood. She has over 50,000 followers
IndianAyurveda is a Twitter account held by a practising Ayurvedic doctor based out of Pune, who blogs about Indian alternative medicine.

(b)Topics discussed:
Diabetes and Cancer are two of the most widely-discussed healthcare topics by Indian HCPs.  Other online HCP conversations in India are usually about broader health-related topics.

Connecting in a crisis

India has one of the highest numbers of social media users. According to eMarketer, the growth of Twitter will be led by emerging countries like India, Indonesia, Argentina and Mexico in the coming years. More Indians, especially the younger urban population, have started opting for social media over mainstream media because of the opportunity they get to participate and engage.

During the recent floods that hit the city of Chennai, thousands of people took to Twitter to share updates and information on relief efforts and rescue operations. #ChennaiRainsHelp hashtag was used widely to extend help to those stranded and required help. social media proved as a link between doctors and patients. Many pregnant women got timely medical aid due to their updates shared on social media. Some doctors too offered medical assistance using Twitter and Facebook to those in need at the time of the catastrophe.

Below are some Tweets seeking medical help during the Chennai Rains: 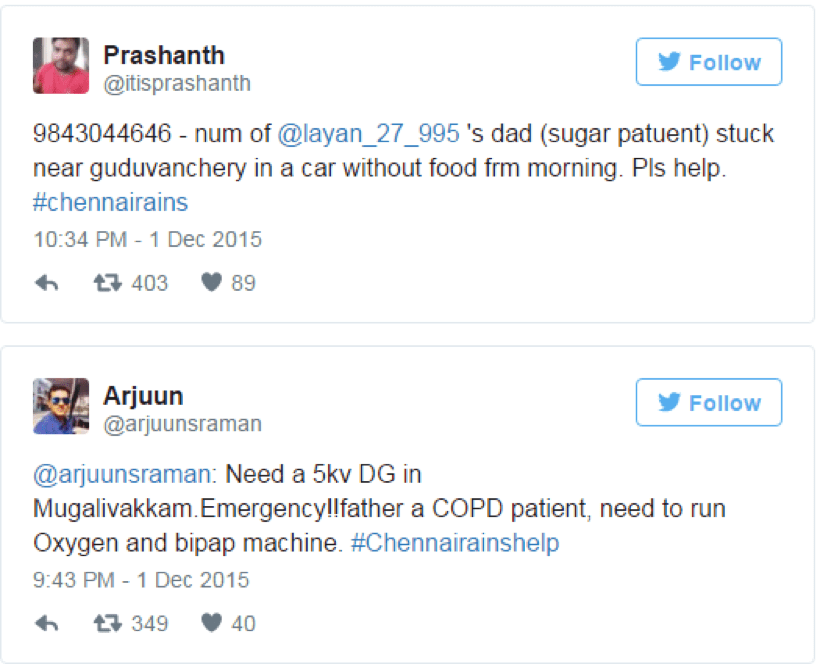 Below are the Facebook posts of Dr. Rahul Jha who offered medical help and advice to those stranded during the floods in Chennai: 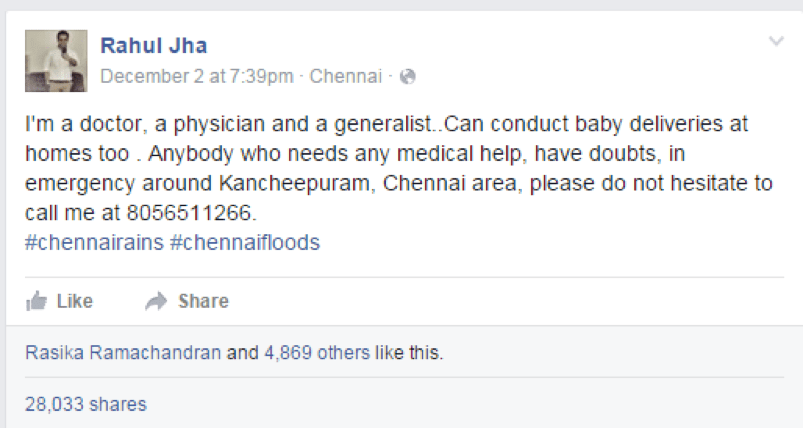 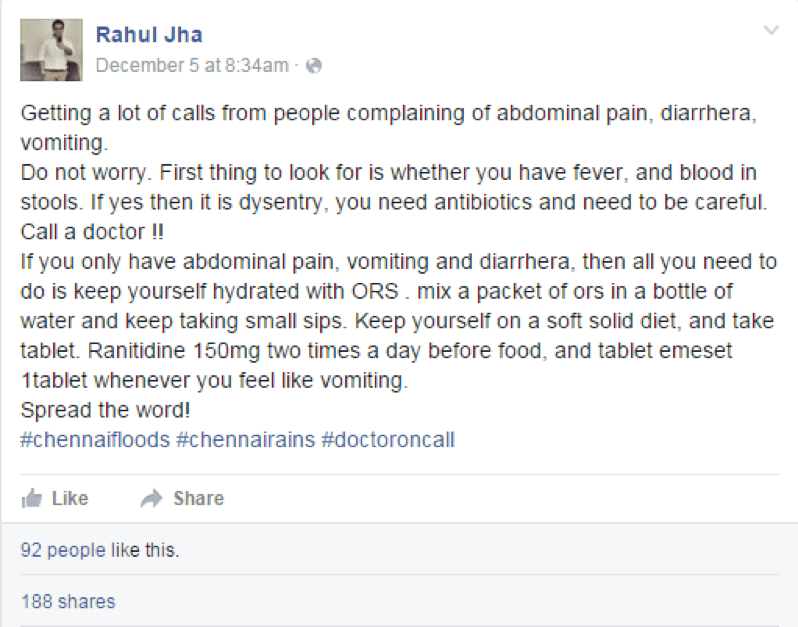 One reason for the relatively slow acceptance of social media by Indian HCPs could be the lack of understanding among many regarding its scope and benefits in healthcare. The internet is often criticized for having unverified information about healthcare. But the potential benefit to HCPs and patients is significant as more doctors get onto social media and provide credible health information.

Suchitra Menon is Associate Consultant with Creation Healthcare and is based in Bengaluru, India.