For many years, Korea has been an innovator in the technology industry and is well known for having the fastest average internet speeds in the world. In this digital culture of speed, we can see the growth of online interaction between individuals in public social media.

From Jan 2016 to Feb 2017 we used CREATION Pinpoint to track the online conversations of over 3,000 South Korean healthcare professionals (HCPs) for oncology related terms. The first thing noted in exploring the conversation was that Korean language made up around two thirds of the mentions, and the remaining third was English. Some HCPs use English language as they share articles and information from UK or US sources and this gives the opportunity to engage with peers on a more global scale. So, generally speaking, we see Korean being used for local collaboration and English for global collaboration. 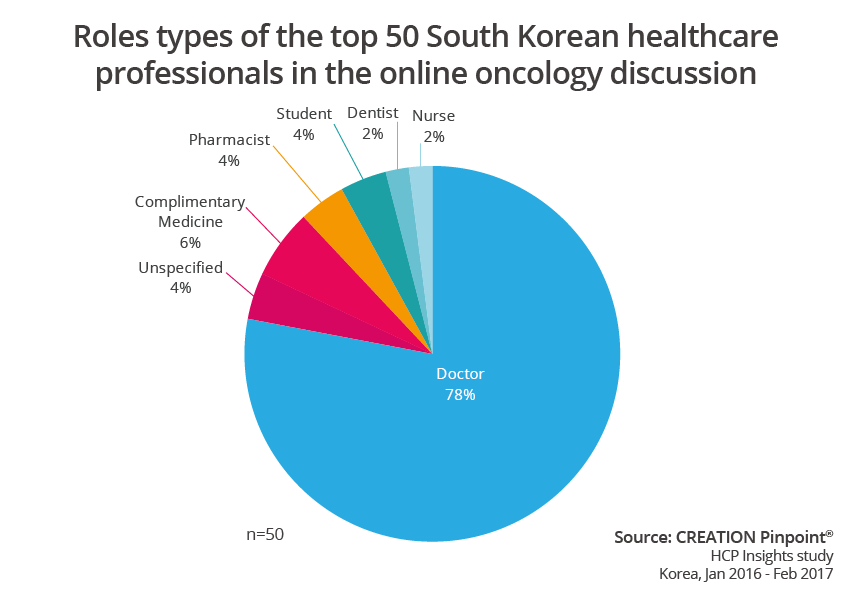 In the oncology conversation in South Korea 78% of the top 50 contributors are doctors. Compared to other markets, as illustrated by studies in diabetes and medicinal cannabis this is unusually high, and speaks about the use of social media among HCPs in South Korea. The other most notable figure is how only one nurse appears in the top 50 HCP authors. We have seen in other nations nurses being one of the most active, if not the most active roles on social media. When looking at the specialities of these doctors we discover that although, as might be expected in a study examining conversation relating to cancer, oncology is the most common specialty, there is a very wide variety of doctors involved in this discussion. 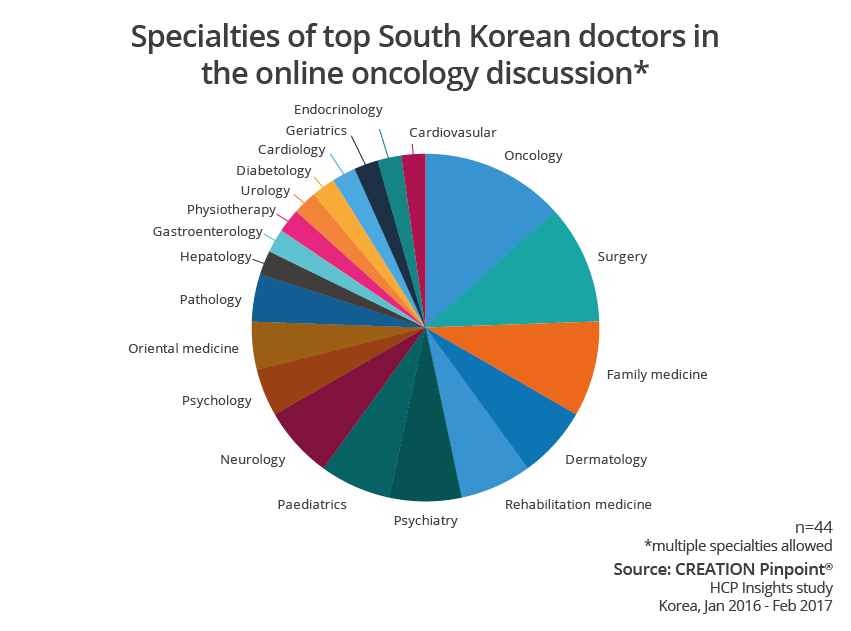 As cancer takes so many forms, we see other specialists who would also deal with cancer in their line of work joining in, such as surgeons, dermatologists and paediatricians. The variety of roles joining in demonstrates the inclusive nature of public social media among HCPs in South Korea.

Based on how much they contribute to the conversation we have identified the top healthcare professionals in this therapy area. The top ranked South Korean HCP in the field of cancer is an author who goes anonymously by the name movedoc on Twitter, whose contribution made up almost 10% of the entire conversation. It is common for HCPs to use an online alias in a number of markets, including South Korea.

Using online open platforms such as social media we can see a new level of possibilities for collaboration amongst HCPs across different role types and therapy areas. In the study, for example, there were three prominent oncologists in the top 10 HCPs but a neurologist contributed most to the study. Therefore, social media can a place for peers to connect with one another to discuss their own therapy area but it also allows others to join in this conversation. 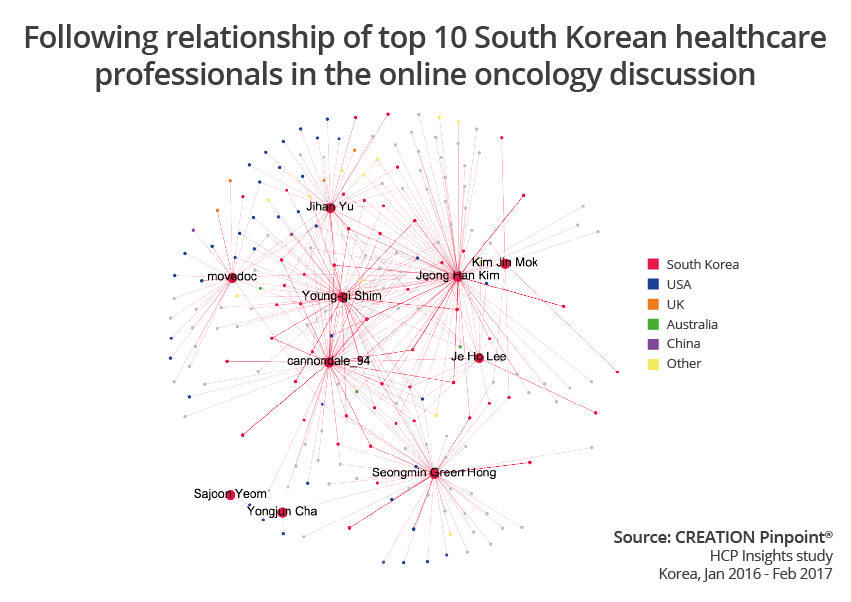 The most connected of the top 10 authors appear closer to the centre of the graph showing us that plastic surgeon Young-gi Shim is the most connected with his peers on Twitter. It can also be observed that, although he was the third highest contributor in terms of study volume, oncologist Youngjun Cha is relatively disconnected online from his peers.

There are many advantages for HCPs to connect with peers online. Some of these, as identified by UK based colorectal surgeon Richard Brady, are better collaboration, instant information and content sharing, and getting knowledge that can be practically used.

With data on South Korean HCPs online growing all the time, the opportunity to learn from specialists in any therapy area has never been better. To discover what you could learn from HCPs online in South Korea, get in touch and tell us what you would like to know.