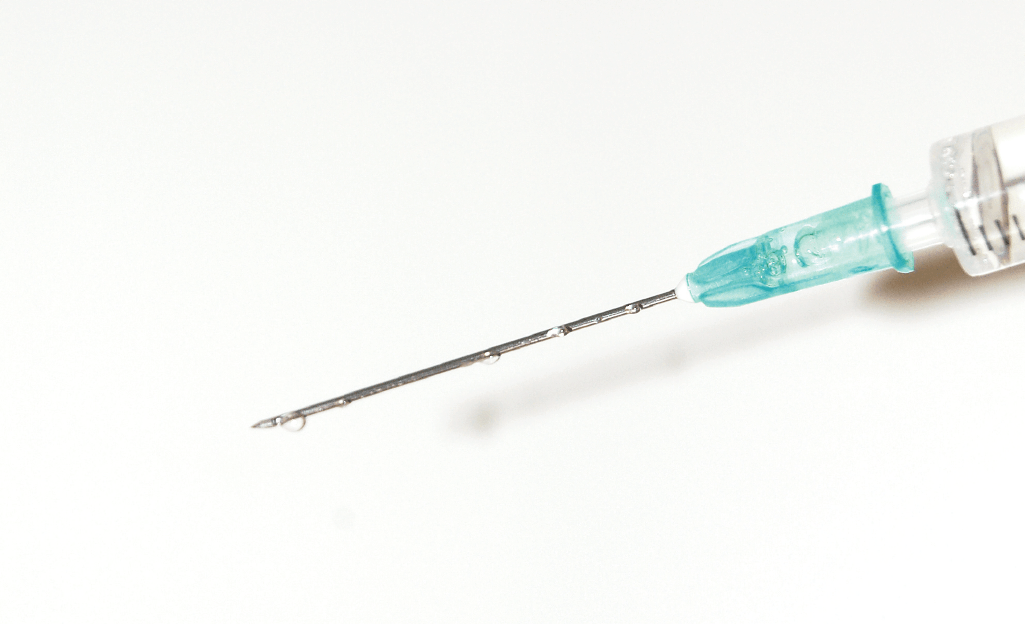 In spite of growing concern about well-publicized outbreaks of Serogroup B Meningococcal Disease (Meningitis B, or “MenB”), especially on college campuses, and rapid advances in meningitis vaccines, MenB immunization still produces significant confusion and anxiety for HCPs. The CREATION team recently conducted a 12-month retrospective study to see how these physician perceptions and responses were reflected in their online conversations – if at all.

Meningitis is particularly tricky to deal with in the global medical community, because different regions are impacted by different meningitis serogroups and as a result, vaccines have been handled differently in terms of their approval pathways. For example, vaccines for serogroups C and Y (the most common serogroups in North America and Europe), Meningococcal conjugate vaccines (Sanofi Pasteur’s Menactra and GSK’s Menveo) have been approved for routine use since 2005. However, even for these well-established vaccines, the US and Europe differ in their recommended administration, with infant administration being prevalent in the EU, but adolescent (age 10-11) administration recommended in the US.

These conjugate vaccines have no effect on MenB, the serogroup that is responsible for most serious outcomes in the US. In 2014, two new MenB vaccines were approved for use – Pfizer’s Trumenba and GSK’s Bexsero.

The MenB vaccines have been in use in the UK since 2015 for both pediatric and adolescent patients (resulting in an enormous reduction in meningitis mortality between 1999 and 2017) but in the US, the two MenB vaccines were approved only for adolescents – until April of 2018 when the FDA granted breakthrough therapy designation for Trumenba (Meningococcal Group B Vaccine) for “the Prevention of Invasive Meningococcal B Disease in Children Ages 1 to 9 Years.” Given the fact that this would finally create parity between US infants and their vaccinated European counterparts, we saw surprisingly little response to the Trumenba news from US HCPs – in fact, it was only mentioned only a handful of times by clinicians in the US, suggesting that there may be a deeper issue with physicians’ understanding and level of comfort with MenB immunization.

It’s important to note that, in spite of this year’s decision on Trumenba, neither MenB vaccine appears on the schedule of routine vaccinations in the US for patients of any age – leaving the decision about whether and when to vaccinate up to the individual physician, with a focus on vaccinating between 16 and 18 years of age. A recent survey showed that only 31% of family physicians “always or often discuss MenB vaccination.”

Connections between guidance and physician behavior

This range of awareness and discomfort is also evident in HCPs’ online conversations about the MenB vaccine. Between September 1, 2017 and August 31, 2018, 78% of global HCP conversations about MenB were related to vaccination – the remainder focused on such topics as disease epidemiology and treatment options.

However, when comparing the US market, with its relatively ambiguous guidelines, to a market with much clearer and better-established guidance from its relevant regulatory body – in this case, the UK – these numbers and the nature of the posts themselves look quite different. Whereas US HCPs’ ratio of vaccine-to-therapy area posts is just slightly less than the global average (at 76%), UK physicians are significantly more likely to post on this topic. Furthermore, US clinicians were twice as likely to post concerns about guidelines, evidence and routine vaccination schedules than their UK counterparts. 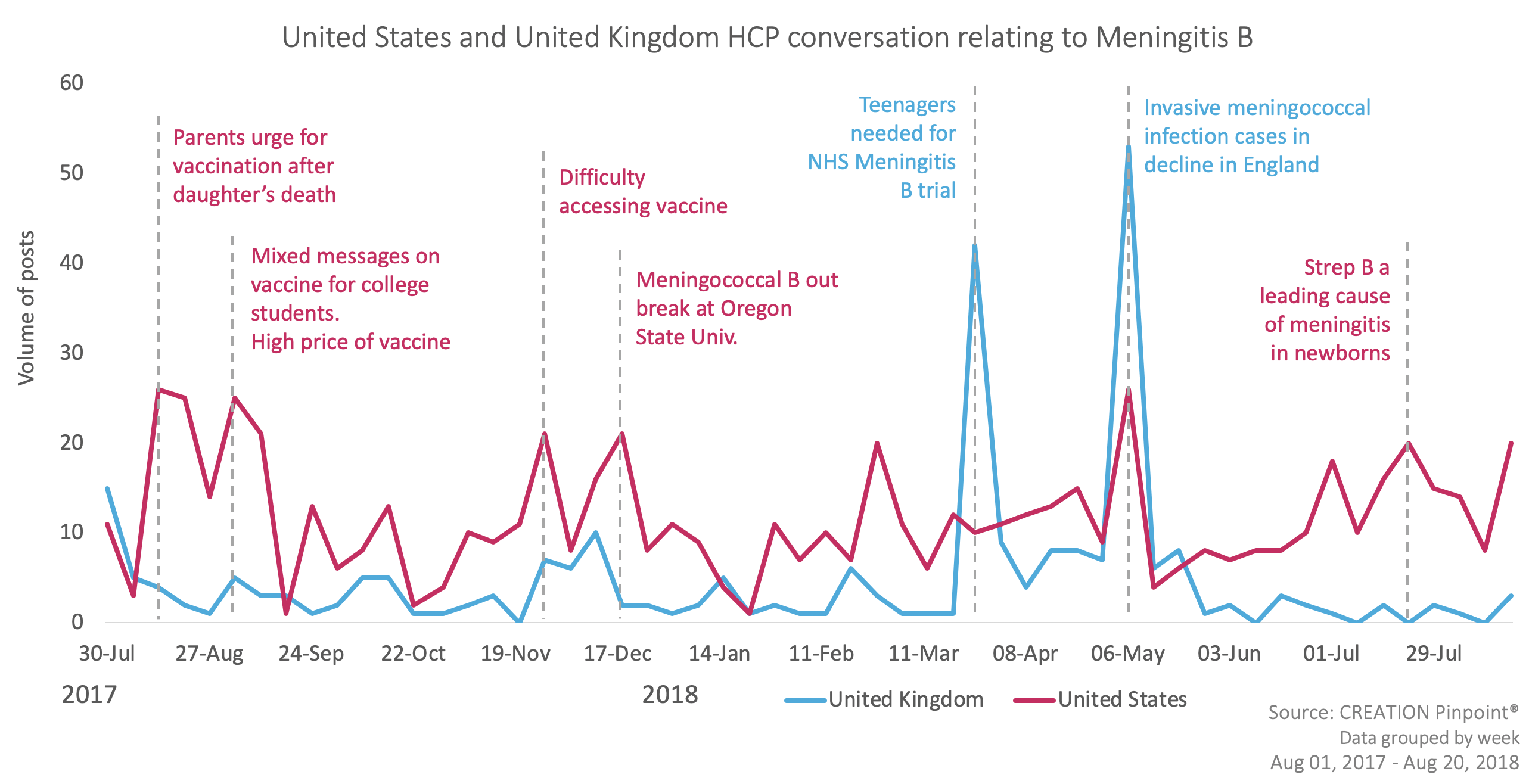 This suggests that US physicians are:

When HCPs did talk about vaccines, that apparent discomfort was evident in two primary ways:

1. Doctors focused on building a greater body of evidence in order to establish strong and consistent guidelines – including a number of posts related to encouraging teens to enter a UK-based study

Big news: Teenagers asked to take part in a study to learn if immunising them against meningitis B could protect them and others. Funded and supported by the National Institute for Health Research https://t.co/yM2nPjSfmC

2. They highlighted the lack of clarity relating to US guidance based in large part on the physician survey referenced above.

US Families sending kids to college get mixed messages on meningitis B vaccine https://t.co/tRM2DnEEin via @shefalil

The permissive use status of the Meningitis B vaccine means that pediatricians differ in how (or if) they recommend it or not. The risk of exposure to meningitis B is very low, but if there's disease, it can be deadly. https://t.co/tA38vh2Egn

As to the individual vaccines themselves, both have been perceived in a neutral-to-positive way by HCPs around the world, with Bexsero drawing more conversation during the 12 month period of the study (September 2017-August 2018) by a nearly 5:1 ratio. 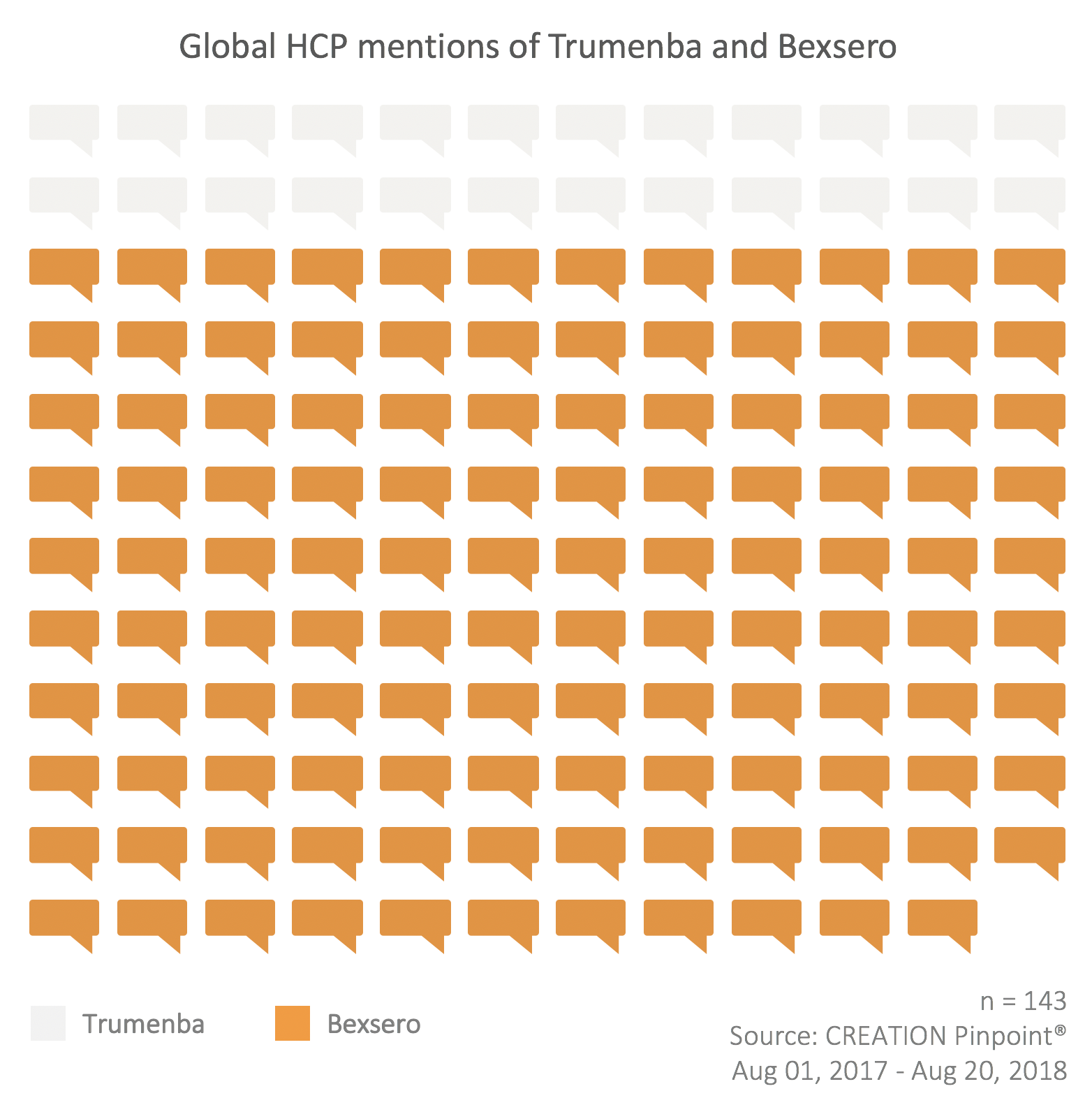 The positive posts about Bexsero were largely related to its perceived efficacy, with many posts citing the results of recent research.

According to a new study, the MATS test predicted that 91% of strains causing serogroup B meningococcal disease in the USA would be covered by the 4CMenB vaccinehttps://t.co/jMunKcIb40

There were several posts that also praised the increased accessibility of Bexsero in Europe, and expressed eagerness for it to become even more prevalent.

As noted, there were some positive posts about Trumenba related to its breakthrough designation, making it available to 1 year olds and up (previously it was available in the US to 10+ year olds only). However, there was less commentary on this than might have been expected, with just a few HCP posts – though one was from an expert reviewer for the National Quality Forum’s Infectious Disease Standing Committee – Amesh Adalja, MD.

"the breakthrough tag covers Trumenba use in children as young as 1 year of age" https://t.co/KybDwn44oD 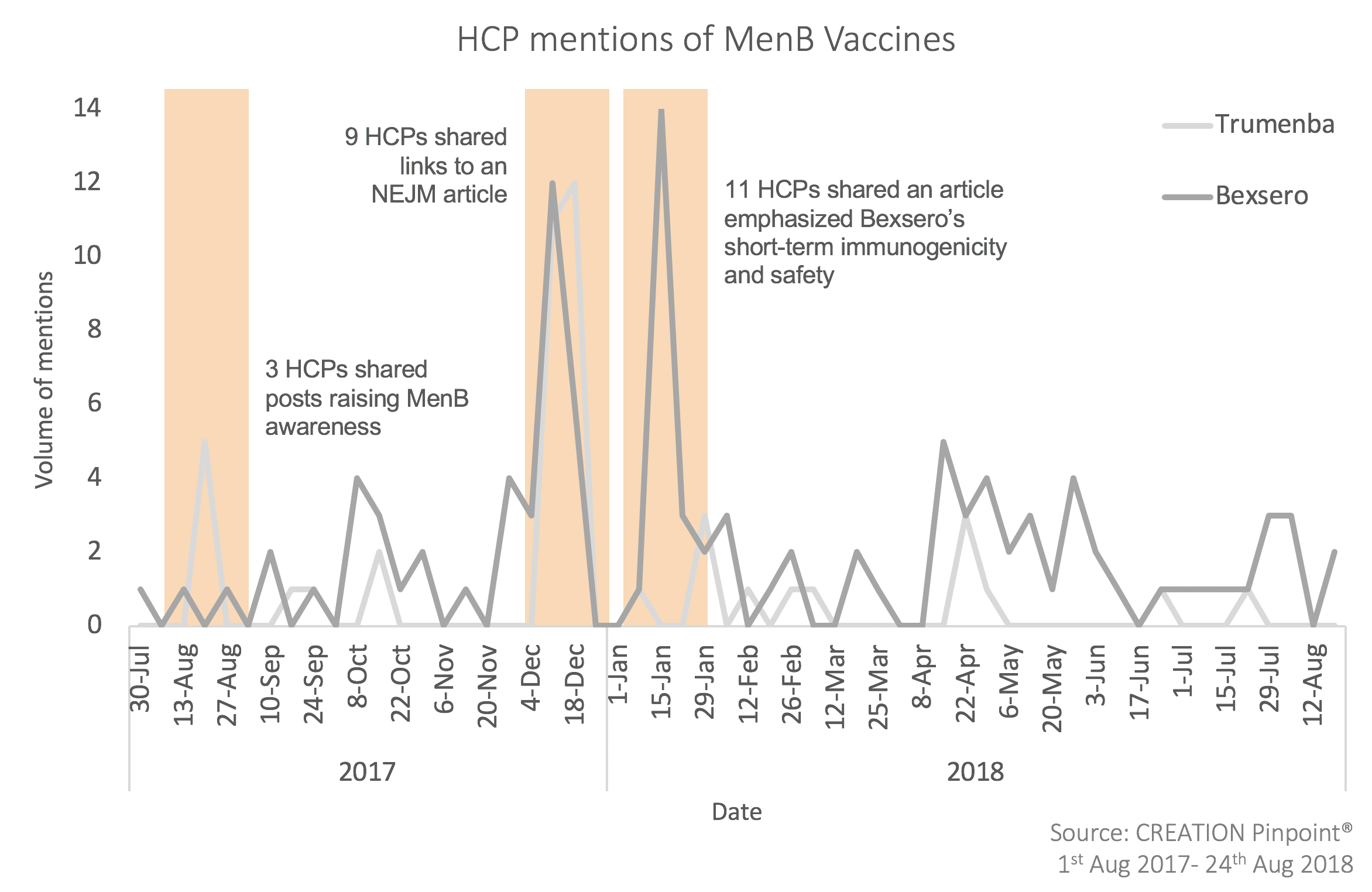 In spite of the relatively slow progress related to HCPs’ handling of MenB vaccines, particularly in the US, there seems to be reason for optimism. With learnings from the routine designation in Europe, the promise of additional studies producing valuable data, and the FDA’s willingness to grant breakthrough designation to Trumenba, it seems likely that physicians’ comfort in vaccinating for MenB will continue to grow. And it can be hoped that, with increased public concern about MenB outbreaks, the appropriate regulatory authorities in the US will provide additional clarity to HCPs on how, when and to whom the vaccine should be administered. Until that happens, however, it is up to other key stakeholders – doctors, advocacy organizations, the media and the industry itself – to increase their efforts around physician education. 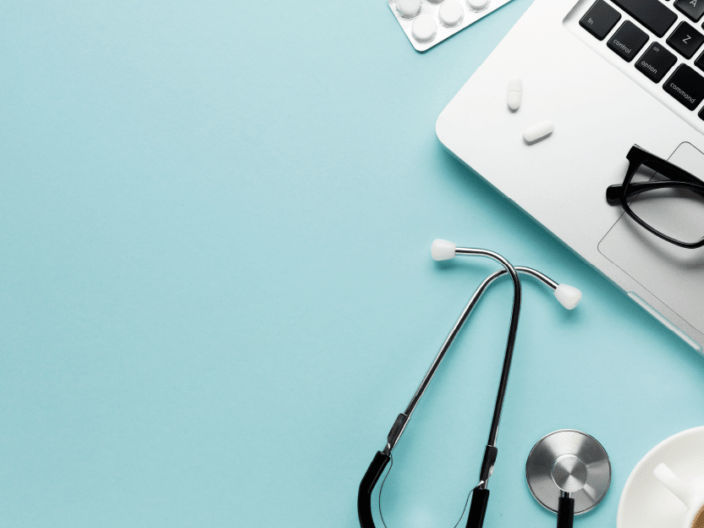 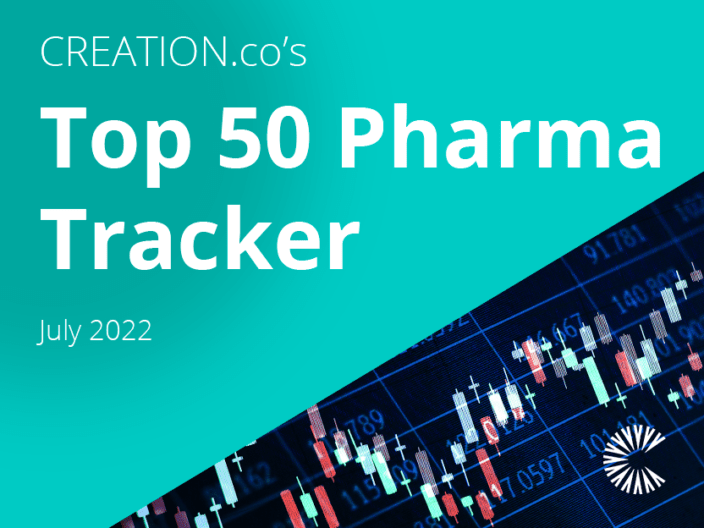